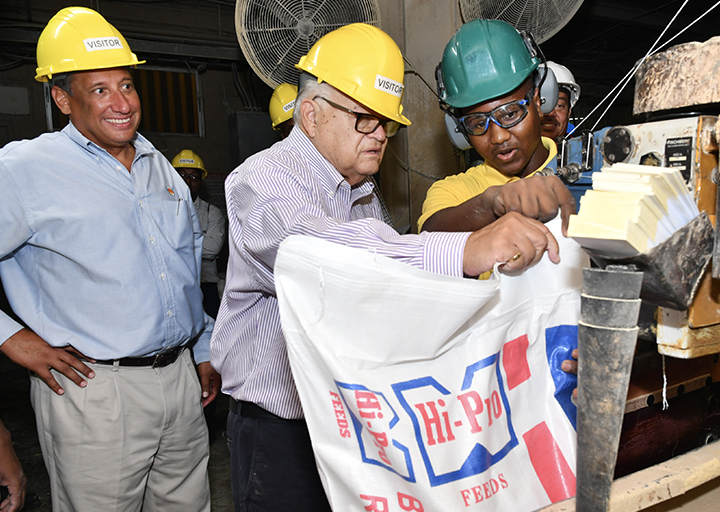 Kemar Tobias, stacking line operator at the new Hi-Pro pellet mill, Freetown, shows Karl Samuda (second left), minister of industry, commerce, agriculture & Fisheries the art of rapid stitching and tagging on the sacking line. Looking on at left is Christopher Levy, president & CEO of Jamaica Broilers Group. The minister was on a tour of the US$2-million pellet mill, following his commissioning of the mill on Thursday, December 14.

Constructed at a cost of US$2 million, the investment, according to JBG President and CEO Christopher Levy, “is really driven by the growth in the industry. Jamaica Broilers has had to invest to keep pace with the growth that we’re expecting and experiencing”.

Production capacity for Hi-Pro feed at the new mill will increase from 270,000 tonnes per year to 350,000 tonnes, or over 20 per cent, making it the largest mill in the Caribbean region. And this improvement in production will match the near-20 per cent increase in sales of Hi-Pro chicks and broiler feeds over the last five years, as reported by the company.

“I want us to just make sure that we understand that this is the largest mill in the Caribbean by far. We’ve doubled our production, you know. This for Jamaica Broilers has been a multi-billion-dollar investment over the last five years, starting with the silos, our hatchery, and now the mill. And we must recognise that as much as we spread our wings as a company, Jamaica is our base and our core. It’s where this company started and it will continue,” Levy stated.

Of the 270,000 tonnes of feed produced by Hi-Pro annually, the broiler, pig and layers markets combined make up more than 90 per cent of all feeds sold in Jamaica. The company exports another 5,000 tonnes of feed throughout the Caribbean.

Levy pointed out that the financial investment in the company was not just a reflection of the demand for its feed product, but also an indication of marked improvement in the agriculture sector, in particular the rearing of animals for food.

“A feed mill of this size is an indication of what’s happening in the agriculture sector as it relates to animals. It’s exciting and it’s not to be taken for granted,” the JBG president said, providing an overview of the agriculture industry.

While conceding that industries go through cyclical economic performance, Levy argued that the contribution of small farmers to the turnaround in the agriculture sector should not go unnoticed.

He said that Jamaicans need to recognise that more employment occurs in the agriculture sector than any other, making it “the backbone of the economy”, a cause he has championed in previous fora.

“Our mission at Jamaica Broilers is to help folks grow and build — small farmers, large farmers. We will be the backbone that supports [them]. We can’t be everything to everybody. But we want you as farmers to grow and invest, because that’s when Jamaica grows and when Jamaica grows, we grow,” he said.