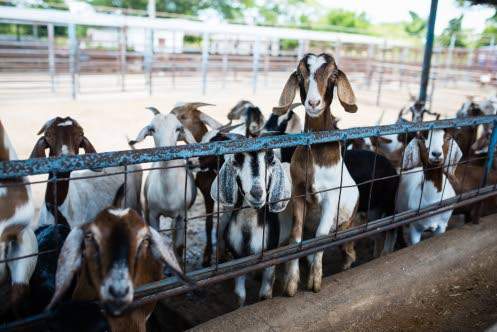 As part of a growth plan for the goat and sheep industries, the Small Ruminants Association of Jamaica (SRAJ) is seeking to work with local farmers to produce high-quality meat animals, while exploring the potential of increasing goat milk production for value-added products such as goat cheese, yoghurt and soaps for the local market.

In addition, given the negative effect of climate change on the availability of fodder, the SRAJ is looking to lease government land to grow hay to supply its members at a reduced price. Currently, goat farmers pay between $600 and $900 per bale for hay.

Speaking at the annual general meeting of the association last month at the Ministry of Industry, Commerce, Agriculture & Fisheries’ Bodles Research Centre, Old Harbour, the association’s president, Trevor Bernard, indicated that there were great opportunities for goat farmers to supply the market with more than meat, especially the specialty restaurants which use the value-added products.

However, he said the current native and cross-breed goats on the island are grown primarily for meat and do not yield high volumes of milk for the value-added products.

“So we will be seeking the support of the Ministry of Agriculture to carry out research on our behalf in order to decide on the best dairy goat suitable for Jamaica that we can import, either through semen, embryos or live animal,” Bernard said. “This has become necessary if we are to expand the small ruminant stock.”

The SRAJ president noted that the demand locally for goat milk and other value-added products that are being produced on a limited scale is outstripping supply. “In fact, we have found that the main purchasers of the goat milk and other goat products are persons who are allergic to cow’s milk,” Bernard noted. “For instance, there is a goat farmer in Trelawny who cannot produce enough goat milk, goat cheese and yoghurt, while there are two other farmers who have got great response to the soaps they have produced using goat milk.”

“In addition, we are working with Hi-Pro, a subsidiary of the Jamaica Broilers Group, to identify farmers who are serious about building their capacity with best practices to increase goat and sheep production,” he continued.
Bernard said there were a number of achievements during 2018. Among them was the hosting of an inaugural Farm Yard Expo in December last year at the 4-H Club, Hope Road, where there were demonstrations on how to carve special cuts of sheep meat, and the steps to take to prepare lotions and soaps from goat milk.