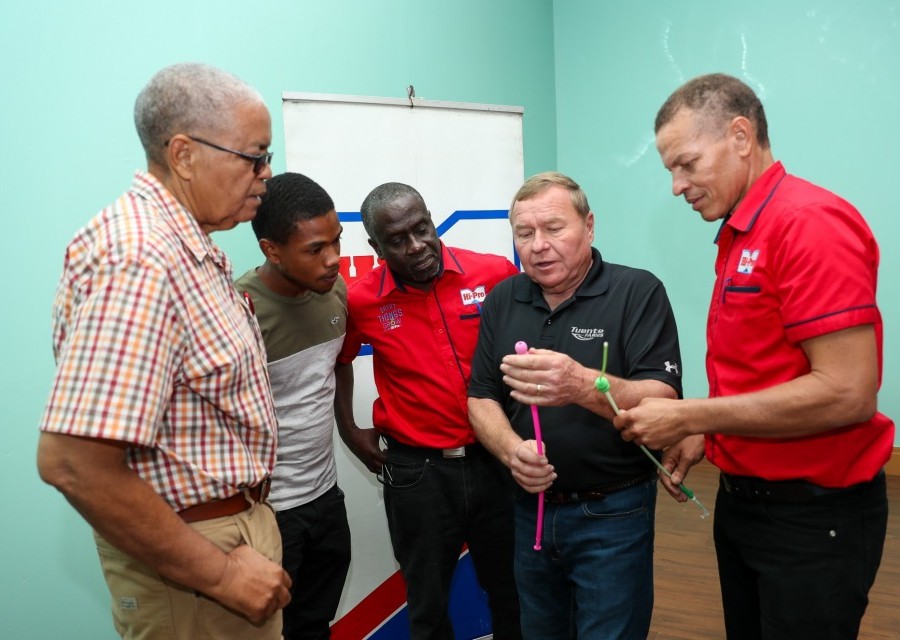 Philanthropist and president of the Ohio-based Tuente Farms Inc, Ronald Tuente recently partnered with Hi-Pro to share best practices and new advances within the sector with Jamaica’s pig farmers.

The HI-Pro sponsored seminar was held at the St John Bosco Conference Centre and Boys Home in Manchester, the beneficiary of much of Tuente’s philanthropic activity in Jamaica.

Tuente, who operates a 5000-sow unit in Ohio, USA, focused on better farm management practices through improved artificial insemination techniques, and bio-security while referencing his farm as the source of empirical data to support his presentation. He demonstrated the use of “newer spirettes”, which are cutting edge material used in the artificial insemination of sows, identifying one in particular as being used for deep in-vitro fertilisation with which has produced a 94.4% conception rate in his sow herd.

He also spoke about the nutritional needs of the herd by adjusting its ration often (up to 32 times on his farm), a luxury he is able to employ due to his access to acres of corn and soy which he also grows on his property, as well as a fully equipped feed mill.

“To be able to ween 3,000 pigs per week seems incomprehensible here, but it’s something we do every week.” Tuente stated.

While the local market does not currently have access to the number of feed rations, Hi-Pro’s pig production specialist, Claude Wilson, noted that farmers need to capitalise on those that are available to maximise benefits to the herd.

“Hi-Pro currently makes six rations available to the market, but the average farmer does not use more than four at a time. Some use even fewer. We would like to see farmers maximising on the benefits available to take full advantage of the growth potential. With a more positive uptake, Hi-Pro would consider increasing the amount of rations produced to extend these benefits even further.” stated Wilson.

The seminar saw 28 farmers in attendance with many expressing interest in visiting Tuente Farms to experience first-hand, the innovations, and best practices at work.