UCT Steppas step away with Everyone’s A Winner Top prizes 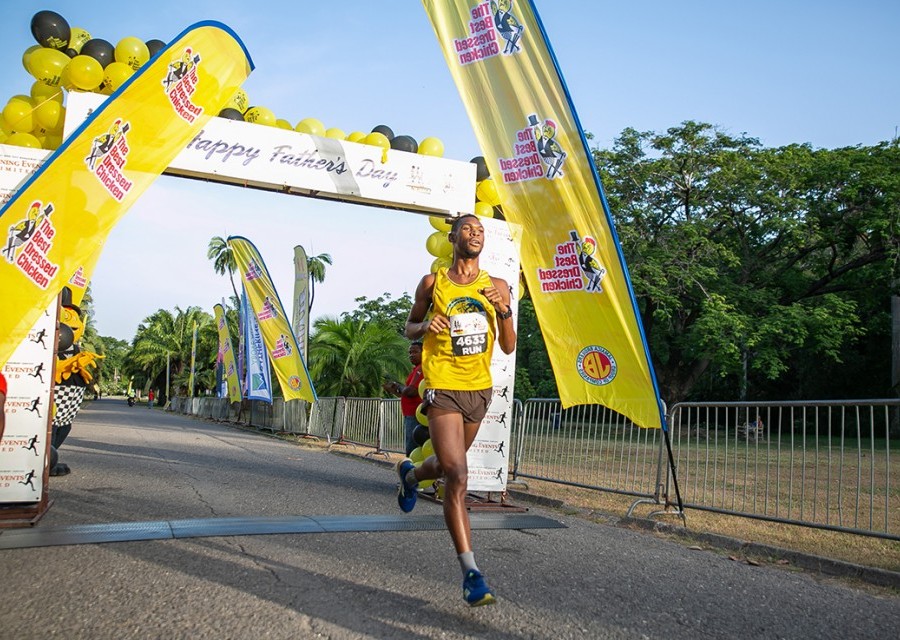 Garfield Gordon wins the Men’s 5K at the the Everyone’s A Winner/Best Dressed Chicken 5K & 10K road races held at the Hope Botanical Gardens in 15:24 on Sunday.

UCT Steppas Track Club swept most of the top awards at Sunday’s staging of the Everyone’s A Winner/Best Dressed Chicken 5K & 10K road races held at the Hope Botanical Gardens.

The event, which was celebrating its eighth staging, saw Garfield Gordon win the Men’s 5K in 15:24 minutes, Oshane Archibald, the Men’s 10K in 34:04 minutes, while the Men’s 5K and 10K teams took the team championships.

In the Men’s 5K, Gordon, who had won the first race of the series, was an easy winner, completing the race almost a minute ahead of a Kemar Leslie of Rainforest Seafoods in 16:11 and Jerome Kirby, also of UCT Steppas, in 16:15 minutes.

In the Women’s 5K, teenager Llori Sharpe is proving to be almost unbeatable as she took the event in 19:08 minutes, more than three minutes faster than Sherona Stewart of UCT Steppas, who was second in 22:16. Third went to Annakay Edwards who, like Sharpe, ran unattached. Sharpe, who is Jamaica’s leading female tri-athlete, has been dominating on the road race circuit whereever she has run this season.

Archibald, who was also a repeat winner in the 10K, was followed home by his main rival, Ryon Chambers of Advanced Integrated Systems, in 34:16 minutes, with Henry Thomas of UCT Steppas completing the top three with a 35:44 finish.

Jozanne Harris of Jamdammers won the Women’s 10K in 47:16 minutes, Janetta Robinson of Pacers Running Club was second in 48:10 minutes, while Pauline Murphy, also of Jamdammers, was third in 48:59 minutes.

The Jamaica Moves VIP Awards went to members of the Salvation Army. In the female category, Nicola Anderson was first, Deidra Isaacs was second, and Jahnella Senior was third.

The Roy Thomas Trophy for clubs was won by UCT Steppas, who amassed 20 points, second were Pacers with 18, and third were Jamdammers with 16 points.