‘Meet a father, Change a life’ 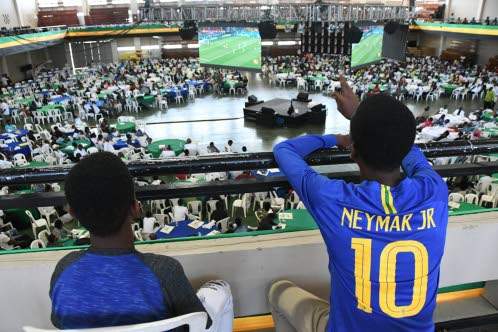 Published by The Jamaica Observer

Men and boys from communities in Kingston, St Andrew and St Catherine watch a 2018 World Cup match on a big screen inside the National Arena yesterday.

CLOSE to 4,000 men and boys from inner-city communities in the Corporate Area and St Catherine were yesterday treated to a special screening of 2018 World Cup matches in celebration of Father’s Day at the National Arena in Kingston.

Director of The Jamaica Broiler’s Group and member of Men’s Bible Study Group Limited, Omar Azan, told the Jamaica Observer that the group, in partnership with several non-profit organisations, churches and government ministries, had put on the event, dubbed ‘Meet a father, Change a life’, in an effort to encourage men to be better father figures.

“We feel that a lot of issues that we are having in Jamaica is due to the fact that males have not taken up their roles as fathers in society, and this is our way to encourage them to do so,” said Azan.

The men were transported free of cost by Jamaica Urban Transit Company (JUTC) buses from their communities to the venue.

“We initially had a challenge because some men without tickets wanted to participate and we did not want to take in more men than we could provide for. The issue was quickly resolved and almost all men were welcomed in,” Azan said.

One Brazil fan, apparently ecstatic after witnessing his team’s goal during the match against Switzerland, spoke to the Jamaica Observer.

“I’m not a father yet but it’s a great pleasure to be here. I really feel at home and comfortable. It’s a good thing to be able to watch the match with all my bredren dem,” he said.

The man, who did not want to be named, also expressed appreciation for the exposure to the various information booths that were up and running at the event.

Jocslyn Taylor, an elderly father of six, said he hoped the event would be an annual one and said he felt “really appreciated and encouraged by the initiative”.

Meanwhile, members of non-profit organisations present also weighed in on the initiative.

Pastor Michael McAnuff-Jones from Operation Save Jamaica said the group joined in on the initiative in an effort help men “appreciate life”.

“We have a strong passion for community transformation and we understand the role of men in providing leadership in communities, and this initiative by the Men’s Bible Group is fully in line with our philosophy as a charity, and so it was a natural partnership,” he said.

Director of Choose Life International, Keith Ellis, added that the function was their way of encouraging young men to do what their organisation says — “choose life”.

“Sometimes young men in garrison communities feel like they don’t have a say in what goes on in our nation and that’s not true. We want to encourage these marginalised men to believe in themselves and there are opportunities to be great and to achieve anything that they put their minds to,” Ellis said.

In addition, he pointed out that his organisation, as well as others, would be following up with the men to guide and encourage them to become better role models in Jamaica.

“We want to help these men to find direction, gain employment, and to choose a more positive way of living,” he said.