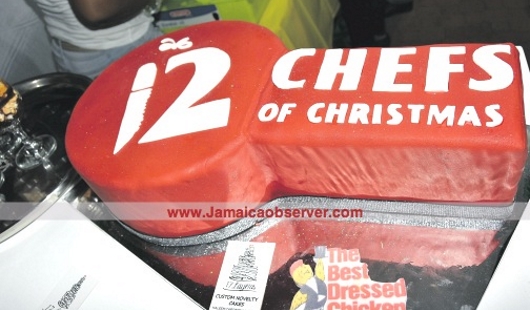 If it’s beginning to feel a lot like Christmas, that’s because The Best Dressed Chicken has once again launched its 12 Chefs of Christmas campaign. The launch, which took place Friday last at Emancipation Park, New Kingston, has made a departure from the first two editions, wherein each of the 12 chefs would deliver gourmet Christmas dinners to the homes of the winners. This year, all 12 winners and their guests will instead be feted at a grand dinner, complete with a personal chef. “The Best Dressed Chicken is always enthusiastic about the importance of family, and so we thought it would be fantastic for us to add even deeper meaning to the holidays by bringing all the winning families together in one space,” said Joan Forrest-Henry, The Best Dressed Chicken vice-president, sales and marketing. “The grand dinner for all 12 winners,” she continued, “takes place on December 26, at a location to be revealed. We’re calling this our wonderland and while we’re not going to reveal the location just yet, our winners can count on it being truly remarkable.”

For a chance to win, customers must purchase The Best Dressed Chicken Whole Chicken, Mixed Parts, Resealables, or Chilled Tray Packs and retain the receipt. Subsequently, they must retrieve the entry code on the card inside the package and text that code to 564-6500. Correctly complete The Best Dressed Chicken campaign slogan (THE BEST DR_SS_D CH_CKEN DI F_VOURI_E) which appears on the card, and retain the card. The competition runs through to December 17, 2016.