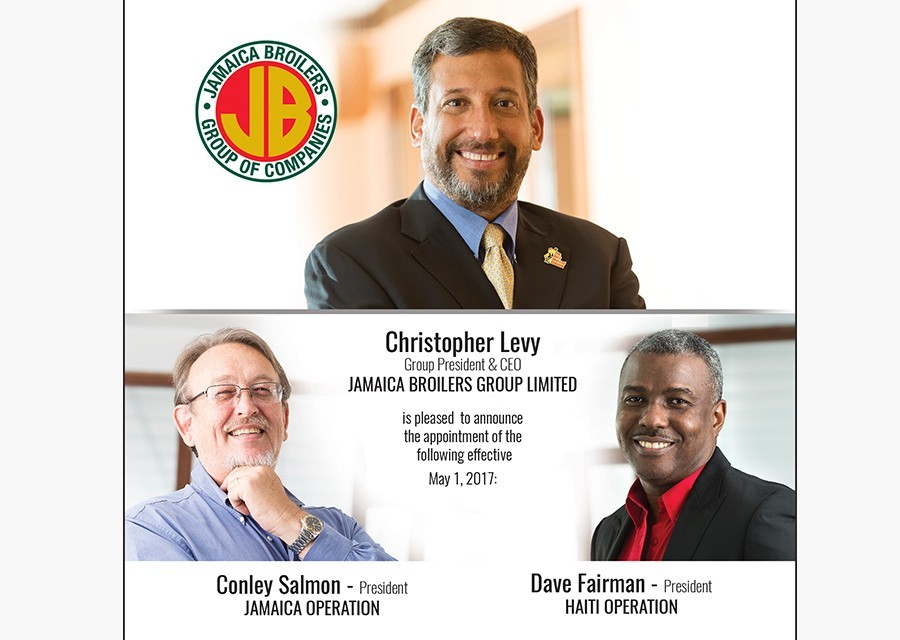 Conley Salmon has worked in several capacities at the Jamaica Broilers Group since he joined as a Project Manager in 1983. Mr. Salmon and his team oversaw the launch of a new Division called Aquaculture Jamaica. Ten years later he was transferred to the Master Blend Feeds Division, taking responsibility for Operations and Purchasing where he implemented the Group’s Ocean Freight and Grain Purchasing Programme, which successfully replaced the previous programme run by the Government of Jamaica. He was later appointed to the position of Marketing Manager of Master Blend Feeds and in that same year became a Director of that Division. In 2001 Conley was promoted to Vice President – Marketing: Feeds & Agricultural Supplies.

In his current capacity, Mr. Conley Salmon will be responsible for the strategic leadership and profitability of the Group’s Jamaica Operations with the primary focus on the production, sales and marketing of the Company’s local flagship brands.

Throughout his time with the Group, Mr. Salmon has studied at several institutions including Kansas State, Cambridge, and Barry Universities in a range of areas from Commodity Trading to Ocean Freight Charter Markets. He currently serves as Chairman of the Board for Moorlands Camps Limited.

Conley is married to Julie and they have 3 adult children and 3 grandchildren.

Coming from a computer science background, Dave Fairman joined the Group in 1990 as a Systems Analyst. He demonstrated remarkable leadership capabilities even in his early years at the company and was soon promoted to Project Leader. Subsequent promotions included Information Systems Project Manager and General Manager, Levy Industries Information Systems. In 2002 he was transferred to Aquaculture Jamaica Limited and in 2004, to Content Agricultural Products before taking up the post of Country Manager, Haiti Broilers S.A. just after the devastating earthquake in 2010. Under his leadership, Haiti Broilers (HB) now produces live and processed chicken, feed and eggs. He takes pride in the fact that the HB team has created meaningful jobs in Haiti and established over one hundred distributors of HB’s fresh, premium products which are rightly labelled ‘The Pride of Haiti’.

In his current capacity, Mr. Dave Fairman will be responsible for continuing the profitable growth of Haiti Broilers S.A. and the firm establishment of our brands.

His educational qualifications include a BSc in Computer Science and Mathematics from the University of the West Indies and a Masters of Science in Software Engineering (Canada). Mr. Fairman also serves as Trustee of the JBG Superannuation Fund.

Dave is married to Sophia and they have 3 children: Kelly, Kayla and Russell.