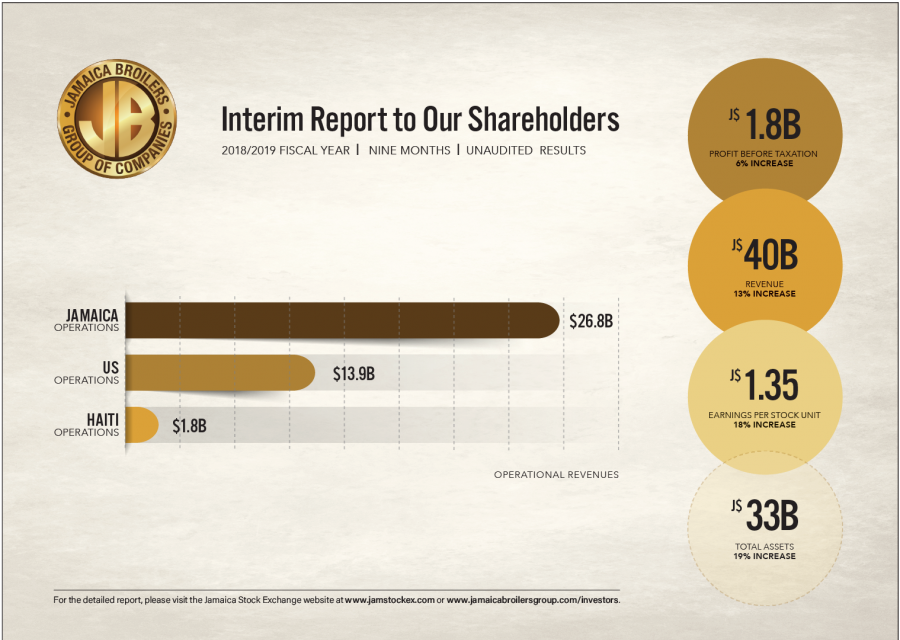 The Directors of Jamaica Broilers Group Limited now release the unaudited financial results for the quarter ended January 26, 2019, which have been prepared in accordance with International Financial Reporting Standards (IFRS).

Total revenue for our Haitian Operations increased by 9% over the prior year driven by increased sales of table eggs. The segment result amounted to $146 million, which is $6 million or 4% below last year’s segment result of $152 million. Effective October 2018, Jamaica Broilers Group Limited acquired an additional 4% stake in Haiti Broilers S.A., thereby increasing our holdings to 72%.

The Other Caribbean Operations reported segment results of $1.5 billion an increase of $1.2 billion over the corresponding quarter of the previous year. The significant increase is mainly due to the net results of the JBGL Stockholders Nominee Limited, driven by the unrealised fair value gains (which are eliminated upon consolidation of the Group) of the shares held.

Distribution and administrative costs, reflected an increase of 14% over the previous year due primarily to exchange movements, salary increases, increased staff complement and distribution costs related to the recent acquisition of the feed mill. These results also include the operating expenses of the new hatchery in Pennsylvania and the costs associated with the formation of the Shareholders’ Trust - these costs were not in last year’s comparative results.

We recorded profits attributable to stockholders of $755 million for the quarter. Our earnings per stock unit of 73 cents for the quarter represents an increase of 20% over the prior year.

The Staff, Management and the Board of Directors of Jamaica Broilers Group Limited continue to trust in the Lord’s guidance for our company and are grateful for His Blessings and Provision.